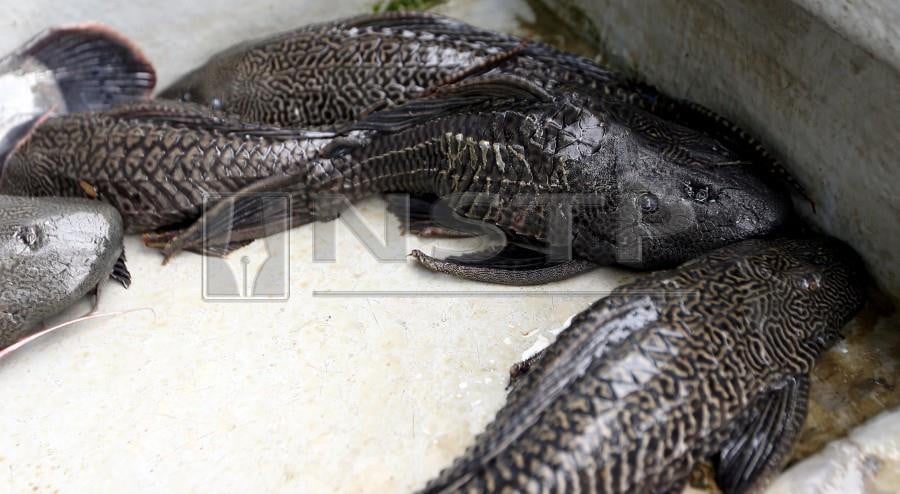 The ‘bandaraya’ fish caught from Sungai Skudai. PIC BY NSTP and WWW.UMPAN.COM

THE presence of ‘ikan bandaraya’ (Amazon sailfin catfish with a scientific name of Pterygoplichtys pardalis) in Malaysian rivers and lakes has proven to disrupt the local ecosystem.

The alien fish can burrow into the ground or riverbanks, causing erosion as well as turning the waters murky.

According to the Johor Fisheries Department, in the long haul, the erosion would get worse if the fish is dumped into the local rivers in large numbers.

The department said the increase in this alien fish population has and will negatively impact the habitat of local freshwater fish in the long run.

“No local fish can live in polluted waters or rivers,” it said.

“The alien fish undoubtedly also causes damage to gillnets and other fishing nets, hence affecting the fishermen’s catch or income.

“Fishermen from Sungai Skudai in Johor have complained to the department claiming that they have been losing catch of local fish. They claimed that they caught a lot of ikan bandaraya instead.

“The species is increasing due to the declining water quality or rise in organic materials (substances) in the Skudai river. There is also no competitor fish in the contaminated aquatic system,” said the department in a statement.

“According to a research conducted by the department in 2018, some 61 per cent of the Amazon sailfin catfish were caught in Sungai Skudai, Johor Baru.

“This species of fish has high tolerance towards unconducive environments and adapting to different water environments.”

However, the Amazon sailfin catfish does not eat fish of its own kind or other fish —it only feeds on organic stacks and polluted aquatic substances, including weeds in the rivers.

“The Amazon sailfin catfish will form its group or colony in waters that contain high organic substances because of pollution or developments in that particular area.

“However, according to the department’s research, this species of fish has yet to form its colony in the Malaysian rivers. This is not a predator fish.”

But the fish, somehow, could also benefit the ecosystem as it feeds on the organic piles and other substances dumped from development sites into the rivers.

The Amazon sailfin catfish was brought into the country in the 1970s for fish hobbyists.

The department said in the aquarium system, the fish functioned as a “cleaner” as it cleans the base of the aquarium that has living organisms (algae) and other organic materials.

“When the fish grow bigger, it will be taken out of the aquarium because it has a natural habit of burrowing, thus damaging plants, decorations and causing injury to other fish species in the aquarium. Thus, it is a threat to the survival of other fish in the tank,” it added.

Responding to a news report over the presence of “ikan bandaraya”, commonly referred to as janitor or municipal fish, in Johor rivers published by a Malay daily last month, the department has stressed that fish hobbyists should not dump the fish in local lakes or rivers when it has outlived its usefulness or is too big for the aquarium.

The department said this was to avoid massive disruption to the biodiversity of the local waters in the long run. It also called on the public to seek advice from the department if there is a need to release the fish into the river.